Pre-shredder is equipped with multiple ripper rotors that rotate at different speeds. The rotors mounted to face each other have rippers uniquely designed to smoothly stab material, which is then torn apart effectively with the ripper rotors running at different speeds. The ripper wheels on the rotors have a large diameter for shredding larger and harder materials. Moreover, the super-slow running rotors provide extra measures for safety in operation, making the Pre-shredder more capable as a primary shredder. 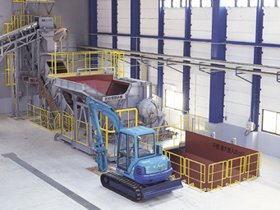 PS3 installed at a scrap shredding and separating facility